President Marianne: A Case Against Reason 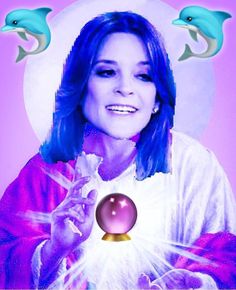 The selection process for the Democratic Party’s nomination for the 2020 Presidential Election began as a diverse, high energy horse race. With candidates coming from a variety of ethnic groups, races, religions, careers and experiences, it seemed probable that America could see its first something—whether that something be an Asian American, a Hindu, a woman or, in Marianne Williamson’s case, a Celtic high priestess—as president.

However, as America’s next President of the United States being an old white guy becomes increasingly likely (how exciting and totally reflective of the ever-homogenous Democratic Party), let’s pause and consider what guru-in-chief Marianne Williamson could do in the oval—soon to be pentagram—office.

Right off the bat, Marianne Williamson could revolutionize our healthcare system. Sources tell the “Golden Lines” that our newly crowned queen hasn’t ruled out putting actress and Goop wellness-mogul Gwyneth Paltrow in charge of ending the coronavirus, likely with a regiment of crystals and moonstones.

And don’t even get me started on Obama “care.” Who needs the big government dreams of Killary Clinton and Monsanto Barack, when we can counter the rising cost of prescription drugs with sweet, beautiful clouds of phrases like “self-directed evolution of self,” “spiritual healing,” “chakra juicing,” and “connectivityness?” You may be asking yourself, what do those words even mean?

But do they have to mean anything? With a Williamson administration, we could look forward to continuing past presidents’ policies of making words and facts obsolete. Who needs Elizabeth Warren’s stellar reputation in consumer protection legislation, Bernie’s time-tested value system, or Joe Biden’s…whatever Joe Biden did well enough to get him this far…when Marianne Williamson can usher in a golden age of Willy Wonka inspired public policy. America has had enough of the left-wing and right-wing, it’s time for angel-wings.

Marianne could also make great strides in foreign policy. Don’t tell me you can’t see Oprah’s very own spiritual advisor, President Williamson, hexing Al Qaeda into oblivion or ending the Palestinian-Israeli crisis with “the power of love” and yoga poses. I know Hamas has been pleading that the U.S. government divest from Israeli security operations, but have the residents of the West Bank heard of zen coloring books? They sure will.

Williamson’s experience as a modern oracle and secret extraterrestrial could also shake up the stock market. If you’re worried about the volatility of American finance, her administration would stay ahead of the curve with wishbones and crystal balls.

And get ready for her Council of Economic Advisers. Mystical Marianne has promised to fill half of the upper level positions with the ghosts of historical business baddies such as Steve Jobs, John D. Rockefeller, Cornelius Vanderbilt and Donald Trump’s father. Surely these captains of industry have something interesting to tell us about which way the S&P 500 is going once Marianne makes contact on the other side.

We’ve seen the DNC rig elections before. Don’t let the Democratic establishment suppress our movement, a .true revolution of vaccine skeptics, Oprah stans, hipsters, and granola bars with legs. Marianne is still in this!

In the 21st century, the Democratic Party needs to stop relying on the crutches of scientific consensus, evidence and discursive reasoning. With Marianne in charge, we can safely close our eyes, cover our ears, and go “la la la la la la” when considering questions of healthcare, housing, climate change, educational curriculums, the land rights of Palestinians, religious and social pluralism.