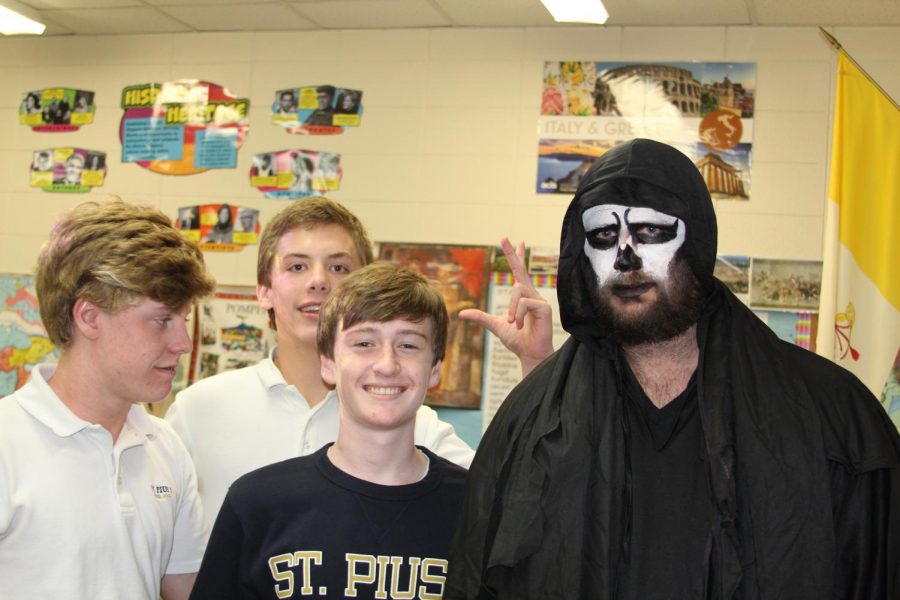 Our very own Latin teacher Mr. Matt Wineski made St. Pius X very. . .proud. . .last weekend at the 2021 Annual Cosplay Contest. Participating in this contest requires a lot of time, energy, and confidence, all which Mr. Wineski has an abundance of. He had to meet strict requirements and advance through several rounds of qualification before the actual competition day, but because of his commitment and spirit he made it to the stage!

Mr. Wineski was so impressive that he actually got a shout-out from the judges in the official cosplay national newsletter.

“We have never seen a man so excited about his costume as Matt Wineski,” the newsletter stated. “He really blew us away with his eagerness to participate.”

Opting for the costume/performance category of the contest, he found one of his favorite outfits and spent weeks in his backyard with his chickens rehearsing the 10-minute skit. There were only 15 slots available for this particular section, so Mr. Wineski set an alarm to make sure he’d be one of the first to show up.

At the beginning of his skit he planned on entering through a cloud of fog. Considering that his character did not wear glasses, Mr. Wineski chose not to wear his own glasses because he wanted to honor the accuracy of the character. Unfortunately, this caused him to misread the fog machine settings so when he went on stage, the fog was so overwhelming that he tripped and fell. Due to the staggering amount of fog and the devastating fall, he was ushered off stage.

Mr. Wineski plans on returning to the contest next year with his eyes on the prize, saying “I have already started working on my costume so I can finally achieve my lifelong dream of placing in the top 10.” Odds are with him because there are only 15 contestants in his category. Regardless, St. Pius will be rooting him on during next year’s Cosplay Contest.