Volleyball player selected for the Under Armour All-American team 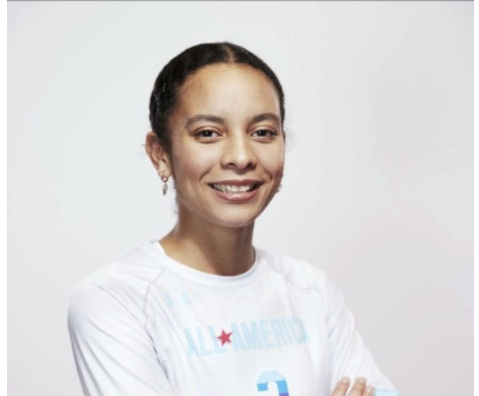 Senior Emma Farrell was one of 26 players nationwide to be selected to the Under Armour All-American team.

To be selected as an Under Armour All-American player is one of the highest recognitions a youth volleyball player can earn. Only 26 girls in the 18U division are chosen per year to play in this game, and for the first time in St. Pius X volleyball history, one of our students was named to this prestigious team.

Senior Emma Farrell is a four-year varsity player and starter, two-year captain, and is the all-time digs leader for the St. Pius volleyball program. Her career started when she was eight years old, playing in the 12U age group at A5 Volleyball Club.

“My mom convinced me to play from ages 8 to 11 because she knew I would love the sport,” Farrell said. “My love for the game really set in around 12 years old. I was finally playing with girls my age with great teammates which made the sport more fun.”

As the years passed, Farrell continued to develop as a player and grow her knowledge of the game. She currently resides as the #41 recruit in the nation, and her club team is second in the nation for their age group according to prepvolleyball.com.

“Emma has an understanding of where to be on the court offensively and defensively. She can read the opponent’s offense and then puts herself in a position to make a defensive play,” said her A5 18-1’s club coach Marc Jones. “Emma brings a calmness when on the court and leads by her hard work ethic. She is very supportive and has the mentality of a fighter.”

During their senior night game in October, Coach John Frederick announced that Farrell was named to the Under Armour All-American team.

“Ever since I started volleyball, I always looked up to girls that were invited to this game and made it my goal to be a part of it,” she said. “When I found out I was selected, I immediately called my mom and was nearly screaming into the phone with excitement.”

Under Armour brought in coaches from across the country to help players further develop their skills. They also got to know these girls throughout the week. One of Farrell’s coaches, Kara Hill helped select girls for the game. Hill is the Director of the Under Armour Games and a widely renowned volleyball coach who helps high school athletes in the recruiting process.

“Emma was a highly recruited libero and one of the best in the country. She is quick, has a solid platform, and was great in serve/receive which is how we ultimately chose her for the event,” Coach Hill said.

Leading up to the game on December 30, the team spent the week at the  UA Next All-American Mansion in Orlando, FL, where they lived together and prepared for the game. The mansion had recovery rooms, a makeup bar, tables full of food, pools, hot tubs, and a rooftop patio for yoga. All of these amenities were designated for the players to maximize their recovery and to make sure they had a good time during their stay.

“It was amazing and made us feel so appreciated,” Farrell said. “They set up every area of the house to keep us active and continued to make us feel honored while being there.”

Not only did Under Armour provide the girls with housing, but they also received a duffel bag full of Under Armour clothing, a $350 gift card to Under Armour to spend in nearby Disney Springs during a night out, and multiple other “product drops” full of clothing, shoes, hats, etc.

“I had never worn Under Armour before, and it introduced me to some great quality clothing. It made me feel so grateful for the opportunity and the amount of stuff we got was unreal,” said Farrell.

Leading up to the game, the girls had multiple practices so they could get acquainted with each other. Each team had 13 players, and Farrell was placed on Team Legends. All practices were held at a club facility in Orlando, coincidentally where the St. Pius X varsity volleyball team placed second in the Nike Tournament of Champions earlier in the season. Most of the practices consisted of basic drills, games with prizes, and filming for media content.

“Most of our time in the gym wasn’t serious,” Farrell explained. “It was all rep-based and geared towards having fun because they wanted us to enjoy this experience!”

As game time was quickly approaching, the nerves began to set in. Televised nationally on ESPNU, the game was played at The Venue, the volleyball facility at the University of Central Florida. This was not only a new environment for most of the girls, but camera crews were placed all around the facility to capture every moment as well.

“Having the cameras everywhere, and a stadium full of people… it can feel like a lot. But once we got going everything felt normal to everyone and we just balled out,” Farrell said.

When the game picked up speed, you could easily tell the girls were just having fun. The game lasted four sets, but throughout the entire game, smiles never left their faces. As Farrell explained, it was no longer a competition or about who would win, it was how can we make the most of our experience?

“Everyone was really just soaking in the experience and wasn’t worried about trying to outplay people or look like the star on the team,” she said. “We would laugh and cheer each other on, which made the win feel even more earned.”

Because of this experience, Farrell’s love for the game grew. Volleyball has provided her with many opportunities and experiences with more to come during her upcoming club season and her next four years at Wake Forest University.

Coach Jones said, “I would like to see her have a successful playing career. I want her to be a team leader and one of the best liberos to have played there. I also want her to have fun while she is there and enjoy the game of volleyball.”

The All-American game brought a new view to her volleyball experience as well. Since this 18U club season will be shorter to give girls time before reporting to college, she is not taking any moment for granted. Her time as a high school athlete has already come to an end, but she is ready for what is coming next.

“It’s easy for people to wish the hard times you experience in volleyball are over and get annoyed, but it’s heartbreaking that my childhood volleyball career is ending,” said Farrell. “Now every time I step on the court, I always am so happy to be there, because my times with my best friends are coming to an end.”

As graduation approaches, Farrell is preparing for her time at Wake Forest. She will join the Deacons volleyball program under head coach Randi Smart’s leadership.

Farrell has demonstrated such an immense love for her sport and a passion for all of her life’s endeavors. All of her coaches, teachers, friends, and family are extremely excited to watch her continue to grow throughout her time at Wake Forest and cannot wait to see everything she accomplishes.