After coaching Jay Kapp ('94) in his first stint with the St. Pius X baseball program, Andy Harlin's return this year gives him the chance to also coach Jay's son, Charlie ('22) 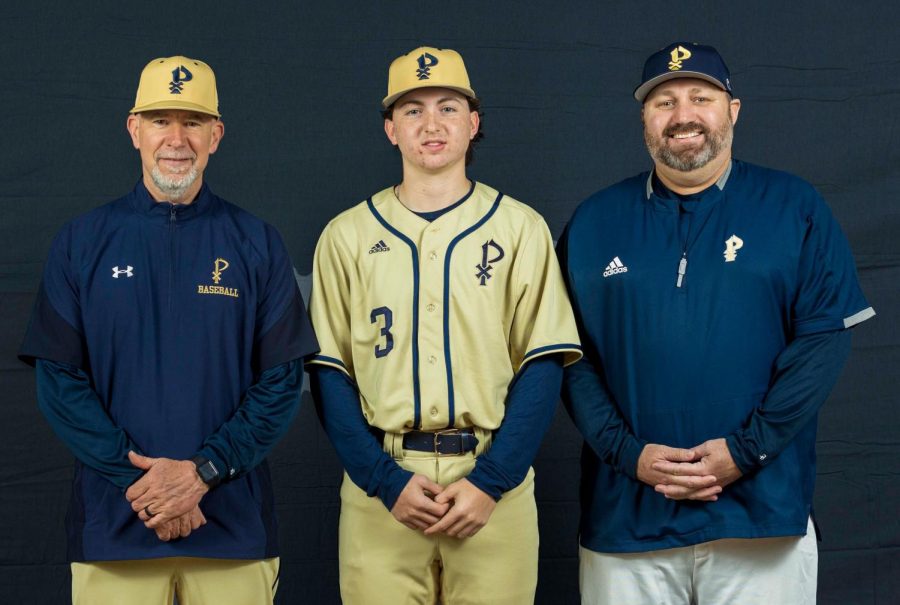 Coach Andy Harlin, a Georgia Dugout Club Hall of Fame coach, re-joined the St. Pius X faculty and baseball program this August after spending the last 20 years at Blessed Trinity. Not only is St. Pius baseball excited for his return, they are also witnessing a memorable season for a father and son.

When Coach Harlin first started coaching at St. Pius in 1991, he coached Jay Kapp. In 2022, he will also get to work with senior Charlie Kapp, Jay’s son. This will mark Coach Harlin’s first time coaching two generations in his 32-year coaching career.

“I was surprised but not shocked,” Jay about Coach Harlin’s return. “I know how much he loves SPX and after talking with him, I could tell that he wanted to come back.”

“I know how much Coach Harlin has given me, and I am so happy that Charlie can be coached by the same person,” Jay said. “I hope Charlie learns. Coach Harlin has a ton to teach — not just baseball.”

Just like his dad, Charlie has a tremendous amount of respect for Coach Harlin.

“It’s good for the team and school,” Charlie said. “He is a great coach and he cares so much about the players.”

It’s this genuine love that keeps Coach Harlin involved in his players’ lives long after they graduate.

“Harlin and my dad still talk daily, they share more past, and have coached together, so I can’t compete with their relationship,” Charlie said.

Coach Harlin’s return is big news not just for the Kapps, but for the entire St. Pius baseball community as well. In addition to being in the Georgia Dugout Hall of Fame, he’s also won three state championships and over 600 games, which makes him the 8th winningest coach in Georgia high school baseball history.

He looks forward to taking over a program that went 28-12 and advanced to the semifinals of the state playoffs.

“I think it is truly something special coming back to St. Pius and having this rarity. It is definitely something that I will cherish for a long time,” Coach Harlin said. “I am also very excited to work with these players and see them develop as athletes and more importantly improve as humans.”

Coming off a big 5-4 win against Marist on Tuesday, the Golden Lions are currently 14-8, and they have a home double-header today starting at 5:00 pm against Stone Mountain.