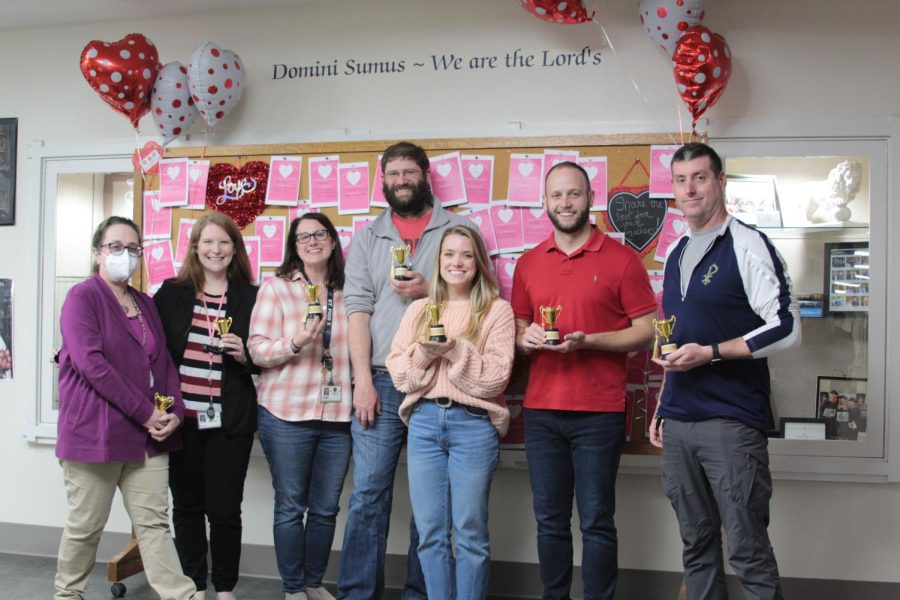 Teachers smile with their trophies after winning a Golden Tassel Award in February.

The first-ever Golden Tassel Award winners were announced last month in conjunction with the annual Going out Golden campaign that encourages the senior class to donate to the Annual Fund. As a new twist this year, seniors also had the chance to vote for the Golden Tassel awards which are similar to senior superlatives but awarded to teachers. There was a wide range of winners across all of the school’s departments.

“The purpose of these is not only to help the seniors with another privilege but also show our teachers how much we appreciate them,” said Advancement Coordinator Mrs. Mary Beyer, who was the creative mind behind the idea.

After donating to the Going Out Golden campaign, seniors had the opportunity to vote on a Google Form in a variety of different categories. Mrs. Beyer said she came up with the creative superlatives past yearbooks and doing some research online.

“It gave all the teachers a good morale boost, and bragging rights [were] included with their win,” she said.

She hopes to do the awards again in the future because of the highly positive feedback given by both the students and the teachers.

Senior Emmy Jansa added, “I really enjoyed voting on these awards because they allowed us to share our opinions about our teachers and our appreciation for them.”

The Class of 2023 needs to start getting ready to think about their picks for next year’s Golden Tassel Awards.
Here are the 2022 Golden Tassel Superlatives Winners:
Best Laugh — Fr. Michael Bremmer

Teacher I Never had but Wish I Did — Mr. Michael Abbott

Most Likely to be Mistaken for a Student — Mrs. Ali (Asip) Wood

Most Likely to Catch You on Your Phone — Ms. Mary Martha Spear

Most Likely to Have Candy in Their Desk — Mr. Charles Hicks

Most Likely to Dress Up for Halloween — Mrs. Rebecca Rose and Mr. Matt Wineski

Most Like Your Mom or Dad — Mrs. Katie Stilson

Most Likely to Teach at Hogwarts — Mrs. Brigid Bartholomai