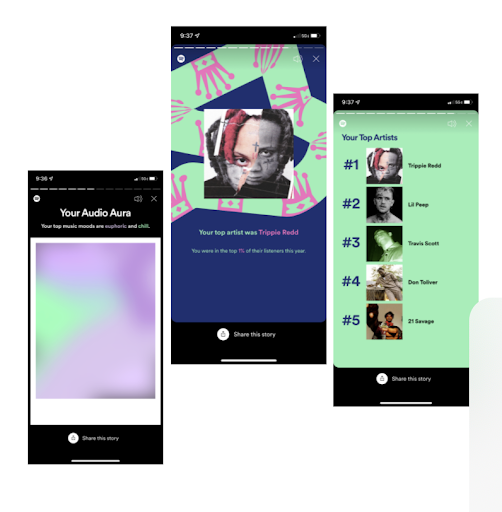 No matter if we’re driving around, chilling at home, or hanging out with friends, music is an essential part of our everyday routine. But the real question is, what is your go-to platform to play your favorite songs? Apple and Spotify users have strong opinions, but I’m here to tell you Spotify dominates all music platforms.

Junior Miles Johnson, who uses both Spotify and Apple music, disagrees with me.

“Apple Music has a cleaner appeal, and Spotify seems chunky and mashed,” he said.

While Johnson calls this chunky and mashed, I call it organized and sleek.

In addition to its looks, Spotify has several features that Apple Music does not. One that I particularly love is the ability to control your equalizer. Some people like songs that blast the bass, and on the other side of the spectrum are those who tend to listen to more classical music, which there is a setting for.

I love to switch between the settings and find which one suits my car best. For me bass is essential, so I keep the bass booster on at all times. This wouldn’t be available to me through Apple Music and their pre-made settings.

In addition to the equalizer adjustments, Spotify no only allows you to make your own playlists, but it also gives you the ability to create your own cover images and mae the app truly unique to you the individual. It also gives suggestions based on your playlists, liked songs, and repeatedly played songs.

For example, when you make a playlist and add at least one song, Spotify provides a recommended songs tab. This tab offers six additional songs that are similar to what’s already added to your playlist.

Even Johnson agreed that “[Spotify] always knows exactly what songs to add to your playlists.”

Spotify is also popular for creating a social media trend that you see posted all over feeds near the end of the year: Spotify Wrapped. Spotify Wrapped not only shows you basic stats from your listening habits throughout the past year, such as total minutes listened to and a playlist featuring your top 100 songs, but it shares your “audio aura” as well. Your audio aura is the category and genre of music you listened to the most. Last year, my audio aura was “euphoric and chill.”

Another Apple Music user, senior Ryan Sowell, admitted that Spotify is superior in this area.

“The Spotify Wrapped thing is cool,” he said. “Apple does the same thing but not as much stuff to it. It’s called Apple Replay and it goes over basically the same stats.”

You’ve heard my arguments, but don’t just take my word for it. Let’s look at the stats. According to Statista, they estimated in the first quarter of 2021 that Apple Music has 72 million subscribers, while Spotify has almost double that amount with 130 million.

Here at St. Pius X, I struggled to find Apple Music users, and of those who had it, most had a family account so it was free to use.

Overall, Spotify definitely dominates the students at St. Pius and worldwide. So, if you haven’t already, what are you waiting for? Make the switch!